The Sepharose CL-6B was used as an affinity chromatography column to purify and analyze the lectin in ginkgo biloba seeds. Chemistry in the news explains the coagulation experiment and comparison with the lectins present in ricinus and in seeds of bitter gourd explained that lectin in ginkgo biloba seeds was a protein with Only one subunit, which was similar to the galactose-specific recognition B chain in ricinus. The method adopted in this study is available for purifying the lectins from different plants.
Keywords Ginkgo biloba; Lectin; Purification and analysis

Purification and Analysis of Ginkgo Lectin

Abstract The use of chromatography mediaSepharose CL-6Bcontains a lotB-chemical properties galactoside bond ligand, its purification affinity chromatography and analyzed ginkgo lectin. By comparing coagulation experiments with lectins in ramie and balsam pear, it was shown that the galectin in ginkgo biloba fruit is a single subunit protein that issimilar totheBchainthat specifically binds galactose in castor. The method used in this experiment is simple and effective, and can also be applied to the extraction and purification of lectins from different plants.
Key words ginkgo fruit; lectin; purification and analysis

Ginkgo biloba fruit has good health and medicinal value, but it also has certain toxicity. At the same time, its extract has the function of agglutinating red blood cells, indicating that it contains lectin.
Lectins are a class of sugar-binding proteins that are widely found in animal and plant life. Plant lectins are a group of proteins with high specific sugar binding activity, which play a certain role in plant self-protection [1] and have toxic effects on cells. In recent years, the research on plant lectins has become more and more in-depth and it has been found that it plays an important physiological role in living organisms [2] . The lectin in Ginkgo biloba fruit may be one of the ingredients that exhibit pharmacological efficacy of ginkgo fruit. In this study, based on the properties of phytohemagglutinin, the chromatographic characteristics of Chromatographic Sepharose CL-6B containing a large number of β-galactosidase ligands were used to directly separate and purify the agglutinates in Ginkgo biloba fruit by affinity chromatography. And compared with lectins in castor and balsam pear.

1 real test
1.1 Reagents and Instruments
ginkgo, castor bean, bitter gourd purchased in the market. Sepharose CL-6Bfiller was purchased from Dingguo Biology Co., Ltd.; experimental rabbits (for red blood cells) were purchased from our school animal center; column tubes(22 cm × 1.5 cm, Millipore,filled withSepharose CL-6Bfiller;40 Cm ×1.5 cm, Millipore),HD-2001-BCNucleic Acid Protein Detector(Shanghai Jiapeng Technology Co., Ltd.),FR-980Bioelectrophoresis Image Analysis System(Shanghai Furi Technology Co., Ltd.), and Vacuum Freeze Dryer( Heto); Thermo Election Corporation; The electrophoresis system consists of Power Pac HV electrophoresis apparatus and Mini-Protean 3electrophoresis tank(Bio-Rad); Various other reagents or drugs were purchased from Guangzhou Chemical Company. Analytical purity.
1.2 Experimental Methods
1.2.1Preparation of sample crude extract. Pre-cooled phosphate buffer (0.01 mol/L, pH 7.2, containing 0.15 mol/L NaCl) was mixed with ginkgo fruit and broken with a high-speed stirrer. The homogenate was slowly stirred at room temperature for 30 minutes. 4 °C extract overnight. After centrifugation (4°C, 10000 rpm , 30 min) , ammonium sulfate was slowly added to the supernatant to 20% saturation, centrifuged to precipitate, and ammonium sulfate was added to 80% saturation in the supernatant, and was left standing at 4°C. overnight. The precipitate was collected by centrifugation ( 4°C, 10,000 rpm , 30 min ) and dissolved with a small amount of phosphate buffer (0.01 mol/L, pH 7.2) , then dialyzed against the same buffer and centrifuged to remove the precipitate.     The method for preparing the crude extract of the ramie sample is basically the same as that of the ginkgo, but it is not necessary to conduct salting out by fractionation, ammonium sulfate is directly added to 60% saturation, and the precipitate is collected by centrifugation.     The preparation method of bitter gourd crude extract was similar to that of Ginkgo biloba except that the buffer solution was Tris CHCl CCa 2+ buffer.

Proteins eluted by affinity chromatography were concentrated in a vacuum freeze dryer (Heto, High Technology of Scandinavia, Denmark) , dialyzed to remove galactose and salts, and subjected to coagulation experiments and gel electrophoresis ( SDS-PAGE ). The coagulation test group contained 25 μl of sample protein, 50 μl of 2% red cell suspension and 25 μl of phosphate buffer (0.01 mol/L , 0.15 mol/L NaCl, pH 7.2) , and was allowed to stand at room temperature for 2 h . In the control group, the sample protein was replaced with physiological saline, and the other conditions were the same. In a control group, 25 μl of phosphate buffer containing 0.20 mol/L galactose
was added to the test group . 1.2.4 SDS-PAGE     Protein Sample solution is mixed with the same volume of 1% SDS solution (with or without mercaptoethanol) as an SDS-PAGE sample. The separation gel used was 12% in concentration . The SDS-PAGE results were analyzed using an electrophoresis pattern analysis system ( FR-980 , Shanghai Furi Technology Co., Ltd.) .

2 Results and Discussion Separation of 2.1 Sepharose CL-6B Affinity Column Figure 1 shows the separation of Ginkgo biloba crude protein solution on Sepharose CL-6B affinity column. Most of the proteins are not adsorbed by the column (large peaks), but there are still a small number of proteins that can be adsorbed (ligands) with the alginogalactosidic linkage. This part of the protein can be considered as a galactose-binding protein, ie, a lectin. The separation pattern of ramie and bitter gourd is similar to that of ginkgo fruit and is no longer listed.

2.2 Coagulation Effect     Figure 2 shows the results of agglutinating blood cells from Ginkgo biloba protein purified by a Sepharose CL-6B affinity column. Bitter gourd and castor bean protein have similar results (not shown). These proteins have a clotting effect ( A and A’ in the figure ) and are lectins, but their clotting activity can be attenuated or inhibited by galactose (B and B’ in the figure). 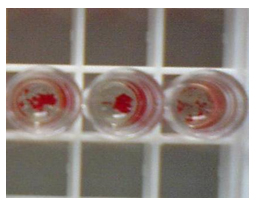 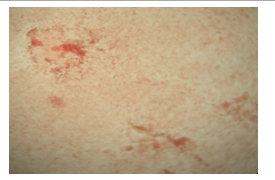 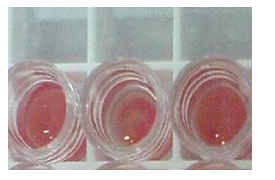 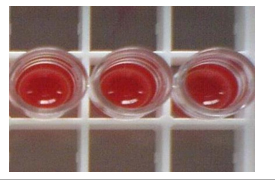 Figure 2 Hemagglutination of Ginkgo biloba protein extractedby Sepharose CL-6 Baffinity column
A, A’ : test group ; B, B’ : galactose-containing control group ; C, C’: control group. A, B, C were photographed with a microscope (10×10) ; A′, B′, C′ were photographs observed with the naked eye.

2.3 SDS-PAGE results Figure 3 shows the SDS-PAGE profile of castor lectin . In the non-reduced SDS-PAGE (non-mercaptoethanol treatment), castor lectin showed two bands with very similar molecular weights, and compared with the standard ( Marker), they had a molecular weight of approximately 63 kDa . In the reduced SDS-PAGE (treated with mercaptoethanol), three electrophoresis bands with molecular weights between 32-36 kDa are shown. These results, i.e. there are 2 two 63 kDa about several molecular weight proteins and 32-36kDa subunits between, and is consistent early reports [3-5] . Figure 4 shows an SDS-PAGE map of the balsam pear lectin , which has only one pure lectin protein band, a molecular weight of approximately 120 kDa , and consists of four subunits with a molecular weight between 32-36 kDa , which was associated with early on balsam pear The report of the galactose-specific lectin was completely consistent [6 , 7] . These results, together with the results of clotting experiments, have proved that
Sepharose CL-6B is feasible as an affinity column to extract lectin.

Figure 5 shows the SDS-PAGE profile of ginkgo lectin . With or without mercaptoethanol, the electrophoresis results for the protein samples were the same with only two bands. To analyze these two proteins, a reductive SDS-PAGE was performed with the lectins of ramie and balsam pear seeds . The results are shown in Figure 6 . Obviously, there is a polypeptide with a molecular weight of approximately 33 kDa (marked by arrows) in all three lectins , which can be considered as a galactose-specific B chain. The polypeptide with a molecular weight of less than 30 kDa in ginkgo protein is not considered to be a subunit of lectin because its content is too low compared to that of another polypeptide. Therefore, the galectin in Ginkgo biloba should be a single subunit protein, which is similar to the B chain that specifically binds galactose in castor , because it also has galactose binding properties. Another polypeptide with a molecular weight of less than 30 kDa is a separate galactose-binding protein. Figure 5 SDS-PAGE chromatogram of ginkgo protein adsorbed on Sepharose CL-6B column Lane 1 : Not treated with mercaptoethanol ; lane 2

2.4 Discussion The
experiment shows that using Sepharose CL-6B , ginkgo fruit lectin can be purified by one-step simple affinity chromatography with good effect and simple operation. Of course, this method can also be applied to the extraction and purification of lectins from different plants.
When compared with lectins in bitter gourd and castor bean, the ginkgo lectin protein is a single subunit and the lectins of bitter gourd and castor bean are multi-subunits, but all have a molecular weight of approximately 33 kDa . subunits -galactose specifically recognized by B -chain. Therefore, the B- chain specifically recognized by galactose is considered to be an ancient protein, and the galactose-specific binding lectin in plants may be developed based on it, which also shows that Ginkgo biloba is one of the ancient plants. In addition, the analysis of ginkgo lectin shows that the protein structure of ancient plants may be relatively simple. With the evolution of species, the structure of functional proteins also evolved from simple to complex.
Although this study proved that the molecular composition of ginkgo lectin is relatively simple and can explain the agglutination effect of Ginkgo biloba extract, there are many unclear relationships between the pharmacological effects of Chinese herbs and their lectins, so ginkgo lectin The relationship with its pharmacological effects remains to be further studied. This experiment lays the foundation for further research.