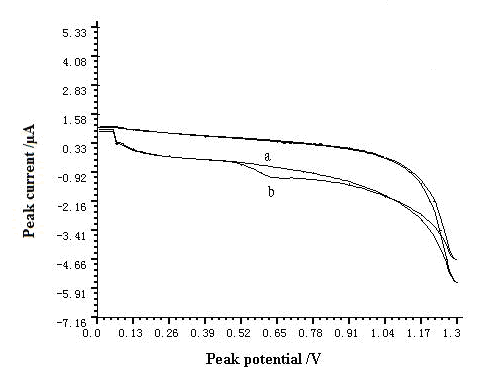 Abstract about interesting chemistry news articles for adsorptive stripping method for the determination of resorcinol on multi-walled carbon nanotube modified glassy carbon electrode (MWNT-GCE) was developed. Cyclic voltammetry was used in the study of the electrochemical behavior of resorcinol on MWNT-GCE. The sharp peak of resorcinol appeared at 0.6 V (vs. Ag/AgCl) with the differential pulse voltammetry (DPV). The experimental parameters were optimized. Anodic peak currents were linear over the resorcinol concentrations in the range of 5.5×10-5-3.3×10-3 g L-1 with a detection limit of 1.1×10-5 g L-1 and relative standard deviations of 3.30-6.94% for 7 determinations. The interference of organic and inorganic species on the voltammetric response was also tested. The proposed method was applied to the determination of resorcinol in tap water and simulative wastewater samples with an average recovery of 95.2-104.8%.
Keywords Determination; Carbon nanotube; Modified glassy carbon electrode; Differential pulse voltammetry; Resorcinol

3.2. Influence of modified electrode
In our study, bare GCE, MWNT modified GCE, and sodium montmorillonite modified GCE were compared during the determination of resorcinol, respectively. The results were shown in Fig. 2. According to the sensitivity of each electrode, MWNT modified GCE obtained a best result.

3.6. Linear range and detection limit
The peak current was proportional to the concentration of resorcinol in the range of 5.5×10-5~3.3×10-3 g L-1 with correlation coefficient of 0.9986. The linear regression equation was Ip = 6.20×10-3C + 0.12241, in which Ip and C indicated the peak current in mA and analyte concentration in 10-5 g L-1, respectively. The detection limit of the resorcinol in water was 1.1×10-5 g L-1. The voltammetric response of resorcinol was practically stable at least 1 h, with a maximum decrease less than 5.0% being quite satisfactory for analytical purposes.
3.7. Interferences
The interferences from some metal ions, anions and other organic compounds were examined with 5.5×10-3 g L-1 resorcinol. Measurements of the peak current for each solution were repeated three times and the average current values were obtained. If the presence of a compound altered the average current of resorcinol less than ±5%, then the compound was considered that did not cause interference. The results showed that 100 folds of Mg2+, Ca2+, K+, Na+, Mn2+, Cd2+, Cu2+, Br–, NO3–, SO42-, CO32-, PO43-, and 100 folds of phenol, methanol and ethanol had no obvious influence on the determination of resorcinol. However, 2 folds excess of ascorbic acid, o-nitrophenol and catechol caused the peak depression about 10%.
3.8. Practical analysis of samples
This method was applied to the determination of resorcinol in samples of simulative wastewater and tap water respectively. The simulative wastewater sample was constructed by adding resorcinol and co-existing components in tap water, which contained 5.0×10-4 g L-1 phenol, 5.0×10-4 g L-1 ethanol, 1.0×10-4mol L-1 NaCl, 1.0×10-4 mol L-1 Na2SO4 and different amount of resorcinol. The concentration of resorcinol was determined by the standard addition method.
The determination of simulative wastewater and tap water was carried respectively by CE method also to validate the proposed method. Results were listed in Table 1. The recoveries and CE method suggested that the proposed method was effective for the determination of resorcinol.